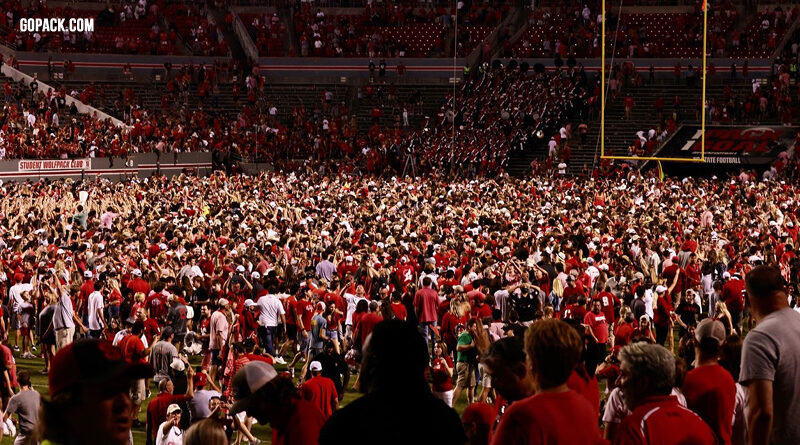 All week long, there was a different vibe surrounding this game. On game day, Carter-Finley Stadium was electric from the pregame tailgates to the opening kickoff until the final play of the second overtime. When Clemson’s final pass fell to the turf, many of those making ear piercing noise in the stands flooded the field. Yes, it was a win worthy of a storm. “The curse is broken, NC State fans, finally.” Those words were part of Dave Doeren‘s opening statement after a thrilling 27-21 double overtime win. For the first time since 2011, the Wolfpack took down the Tigers, winners of 6 straight ACC championships.

ATLANTA— Jeff Sims came off the bench to run for three touchdowns and pass for another, Georgia Tech’s defense stifled Sam Howell much of the game and the Yellow Jackets beat a ranked team for the first time in Geoff Collins’ three seasons as coach, upsetting No. 21 North Carolina 45-22 Saturday night.

CONWAY, S.C. – The No. 20 nationally-ranked Coastal Carolina football team scored on eight of their nine offensive possessions, with the ninth ending due to the end of the game, forced seven punts, picked up a safety, and blocked a punt for the second time this season to cruise to a dominating 53-3 home win over the Massachusetts Minutemen on Saturday afternoon at Brooks Stadium.

GREENVILLE, S.C. — Fred Payton passed for 168 yards and a touchdown, and Mercer rode a solid defensive effort to beat Furman, 24-3, in the Southern Conference season opener for both teams in front of 10.203 fans Saturday afternoon at Paladin Stadium.

Charlotte won its C-USA opener for the second time, beating Middle Tennessee 42-39 and improved to 8-2 in its last 10 C-USA games. Charlotte also improved to 9-2 in home games under head coach Will Healy, putting up a season-best 559 yards of total offense and scoring six TDs.

Chandler Staton hit a go-ahead field goal from 45 yards out with 5:45 left, and the defense made a key stand before Nate Noel’s open-field running clinched a 31-30 victory over longtime rival Marshall on Thursday night in front of 28,377 fans at a rocking Kidd Brewer Stadium.

ELON, N.C. – Despite a valiant comeback effort, the Elon football team lost its CAA opener to William & Mary, 34-31, Saturday in front of 11,897 fans at Rhodes Stadium. It was the fourth largest crowd in the 20-year history of the stadium.

COLUMBIA, S.C. (AP) — Matt Ruffolo made three field goals to help Kentucky beat South Carolina 16-10 on Saturday night. Despite its three turnovers, Kentucky (4-0, 2-0 Southeastern Conference) beat South Carolina (2-2, 1-1) for the seventh time in eight years, and set up a collision course toward next week’s matchup at home against No. 11 Florida.

CHARLOTTESVILLE, Va. — Led by an outstanding and efficient offensive performance and a strong pass rush, the Wake Forest football team captured its first road victory of the season on Friday night as it defeated Virginia in Charlottesville, 37-17.

GREENVILLE, N.C. – The Pirates rebounded from an early 14-0 deficit with 31 consecutive points and sealed a 31-28 victory over Charleston Southern.

Coupled with a suffocating defense, the Aggies stomped their way to a 37-14 win over the N.C. Central Eagles Saturday night at Truist Stadium. It was A&T’s fourth straight win over the Eagles as the Aggies (1-2) avoided their first 0-3 start in 11 years.

BOILING SPRINGS – Gardner-Webb rallied for 28 unanswered points in the second half and took a 52-34 win over Western Carolina Saturday night in front of a strong Spangler Stadium crowd.

LEXINGTON, VA. – The Wofford College football team was defeated 31-23 by VMI on Saturday afternoon at Foster Stadium.  With the game tied 14-14 at the half, the Keydets outscored the Terriers 17-9 in the second half to secure the victory.