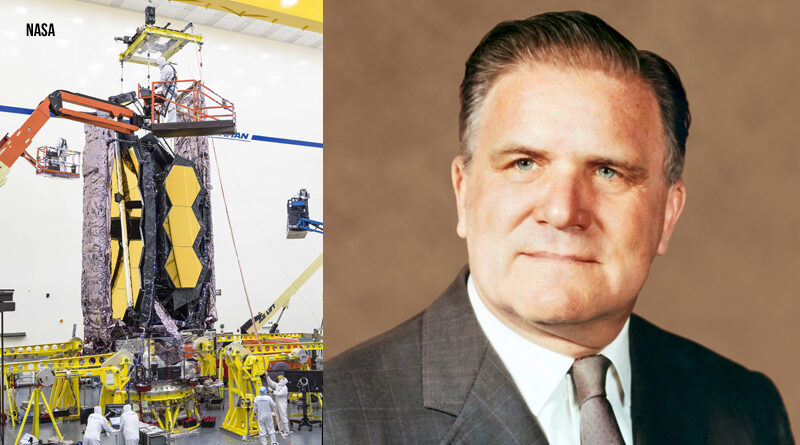 NASA’s most powerful space telescope ever—created over three decades—launched this Christmas morning—is named for UNC alumnus James E. Webb. Webb came out of deep rural Granville County, the son of a school superintendent (also a Carolina graduate). After dropping out of Carolina for a year because he couldn’t afford the costs, Webb learned how to take shorthand and to type, skills he used upon his return to Chapel Hill to work his way through college. He graduated in 1928 with a bachelor’s degree in education and a Phi Beta Kappa key.

The James Webb Space Telescope succeeds the currently orbiting NASA’s Hubble Space Telescope. Many believe that James E. Webb, who ran NASA from February 1961 to October 1968, did more for science than perhaps any other government official and that it is only fitting that the Next Generation Space Telescope would be named after him.

Webb’s vision of a balanced program resulted in a decade of space science research that remains unparalleled today. During his tenure, NASA invested in the development of robotic spacecraft, which explored the lunar environment so that astronauts could do so later, and it sent scientific probes to Mars and Venus, giving Americans their first-ever view of the strange landscape of outer space. As early as 1965, Webb also had written that a major space telescope, then known as the Large Space Telescope, should become a major NASA effort.