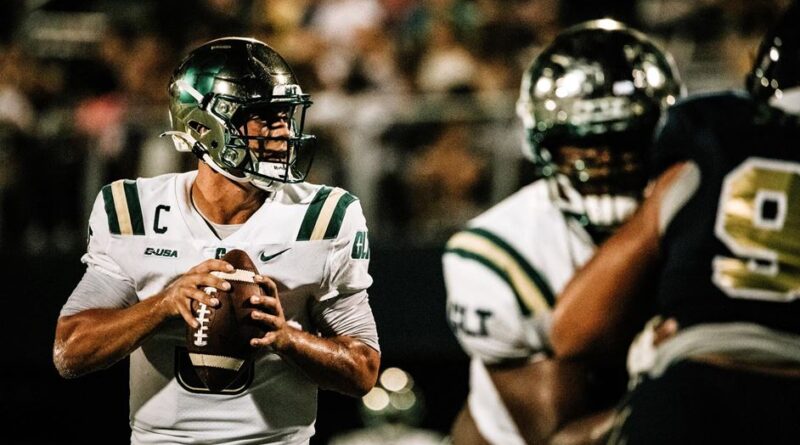 JONESBORO, AR. – The No. 15 Coastal Carolina Chanticleers led from start to finish in a 52-20 win over the Arkansas State Red Wolves on Thursday night in Jonesboro, Ark. With the win, the Chanticleers became the first FBS team to become bowl eligible this season.

DURHAM – A late score by Georgia Tech with under a minute remaining separated the Yellow Jackets from Duke, 31-27, Saturday afternoon at Brooks Field at Wallace Wade Stadium.

The ECU Pirates stood on the verge of a monumental victory, but a 1-yard touchdown run by Mark-Antony Richards with just 23 seconds to play lifted the UCF Knights to a 20-16 comeback victory.

ORONO, ME – The Elon football team went 12-of-16 on third downs and the Phoenix won a road CAA Football game for the second consecutive weekend, defeating Maine 33-23 Saturday.

The A&T running back trio of Jah-Maine Martin, Bhayshul Tuten and Kashon Baker combined for 186 yards and two touchdowns on 31 carries. But it was Tuten’s spectacular 60-yard touchdown reception where he took a swing pass from quarterback Jalen Fowler and ran through five missed tackles galloped down the sideline for the winning score in the fourth quarter.

DURHAM, N.C. – North Carolina Central University sophomore quarterback Davius Richard threw for 313 yards and two touchdowns on 32 pass completions, just one away from the school record, but Tennessee Tech rushed for more than 200 yards as the visiting Golden Eagles defeated the NCCU Eagles, 27-16, on a rainy Saturday afternoon inside O’Kelly-Riddick Stadium.

BOILING SPRINGS, N.C. – Knotted at 28-all with under five minutes to play, Campbell ran in a pair of touchdowns while forcing three Gardner-Webb turnovers to seal a 42-28 victory in the inaugural North Carolina East/West Barbecue Bowl at Spangler Stadium.

JOHNSON CITY, TN – The Citadel saw its two-game win streak come to an end Saturday as the Bulldogs fell, 48-21, to No. 12 ETSU inside William B. Greene Stadium.

MURFREESBORO, N.C. – In a top-25 match up the Chowan Football team came up short against Bowie State in a CIAA North Division clash on a rainy Saturday afternoon.

CULLOWHEE, N.C. – Western Carolina rallied from a two-touchdown, first-half deficit on Saturday afternoon, clawing back even early in the fourth quarter on a Richard McCollum field goal. However, Mercer capitalized on a pair of fourth quarter miscues by the Catamounts to spoil WCU’s annual Homecoming game with a 34-24 victory in Southern Conference action in front of 11,123 at E.J. Whitmire Stadium / Bob Waters Field.

Florida A&M slithered past South Carolina State in a dominant 30-7 win on Saturday at Bragg Memorial Stadium in Tallahassee.

GREENVILLE, S.C. — Devin Wynn rushed for 204 yards and two touchdowns, and quarterback Jace Wilson fashioned an impressive career starting debut, passing for 189 yards and a score, while rushing for another, to power Furman past Wofford, 42-20.