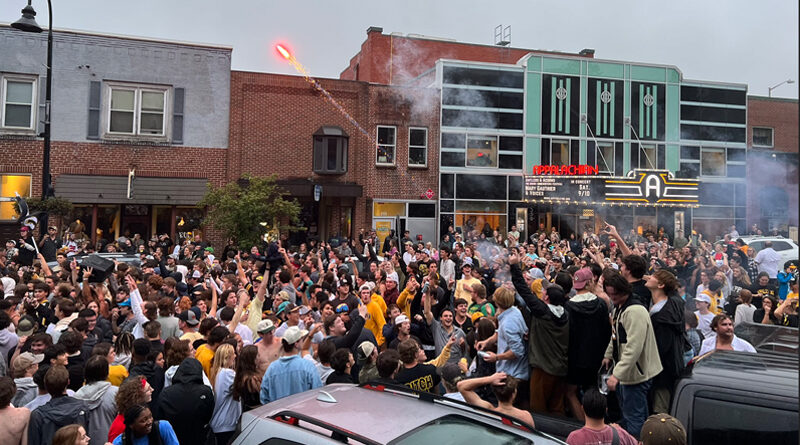 There are 130+ colleges and universities in North Carolina. Only a few can make the Collegiate Standard Top Party School cut. In descending order:

Appalachian State consistently ranks at the high end of the Collegiate Standard Top Party Schools list—earning the coveted #1 title twice: eleven years ago to the day, in 2011-2012, and now in 2022-2023.

Local access to A+ night life per capita, including The Local, Appalachian Mountain Brewery and The TApp Room—perennially ranked one of the Best College Bars in America. And for those who like the party day life: ASU offers bouldering, caving, canoeing and the finest collegiate outdoor programs in the country. That makes for party opportunities 24/7 and possibilities world without end. Think of it: blasting eight beers through a bong with a power drill while bat hanging from a boulder on the side of a Blue Ridge Mountain.

Amenities aside, there is something else—something more vital—an indomitable united spirit within the 20,000+ body of ASU that is singular, usually subdued and at peace in the docile bucolic atmosphere of its small town world, and yet—therein abides a party spirit second to none when it’s activated, eruptive, and effusive, whenever the Mountaineers shock the world.

This year the catalyst flames fell on the gridiron versus college football powerhouse, No. 6 Texas A&M—in the Aggie house—no mean feat, sports fans. Back home watching in NC, when the Mountaineers looked like it would prevail, in the waning minutes leading to victory assured, the party started with intermittent bubbles of rhapsody—like eager hot lava, waiting for permission to shoot molten missiles skyward over Boone. The ensuant party volcano did not disappoint. Yes, there were mass wild dunkings in the fabled campus duck pond, but it’s those unforgettable scenes of humanity liberated immaculate, compressed at both ends of King Street in Boone, released, gushed, collided and erupted at the center—those are the scenes that define the iconic collegiate partying highlights of 2022-2023.

Partying has taken on new shapes and sounds at UNC Charlotte over the last few years. No doubt the induction of college football to the 49ers culture has been an influence. Charlotte’s student population is also growing neck and neck with UNC–Chapel Hill; numbers aren’t everything but they count. The Charlotte campus is the most diverse in the state too—maybe the Southeast.

Located in the second largest banking center in the United States after New York City, as it is written: “money answers everything” which means there is no shortage of party venues and activities 7 days a week for the collegiate faithful of Charlotte. Last year, someone anonymous (rumors say it’s possibly former Bank of America CEO Hugh McColl or Charlotte alumnus American Idol Clay Aiken) donated $10 million to construct a party complex on the campus. Charlotte also has its own beer brand: Gold Rush Gold Lager, to tuck in with at home, for there are legions of righteous parties going down at the apartment and Greek levels. Near campus the Flying Saucer Draught Emporium is legend for its 200+ global beers and pub fare. Or take the light rail into the city or down to NODA, Charlotte’s arts and entertainment district.

Whatever it is, or perhaps the confluence of all of the above, Charlotte is an animal—and its trajectory appears likely to take the coveted #1 Party School title sooner than later.

NC A&T State University is America’s biggest HBCU and the top producer of black graduates in the fields of engineering and agriculture in the nation. It has opened new centers of cutting-edge study in advanced manufacturing, cybersecurity, entrepreneurship, and vehicle technology. Last year, NC A&T topped the CS Top Party Schools at #1 and continues to ride among the toppermost of the partymost. The Aggies are loose. How to party, yeah, they know how to party. And every year (sans the pandemic) it’s GHOE (jee-hoe), baby!

East Carolina is referred to as “G-Vegas” because what happens in Greenville stays in Greenville. A+ night life including The Loft By Still Life and Sup Dogs, a power substation on the outside but 3-time winner of Barstool’s Best Bar competition for the Best College Bar in America.  Barefoot on the Mall, Polar Bear Pool Party, Midnight Madness, Mardi Gras … there’s always something to party to at ECU.

A decade ago Playboy ranked East Carolina #5 on its national party school list and for good reasons it’s been on everyone’s party list since. Recently, however, there’s been a campaign to downplay ECU’s party school reputation. Chancellor Cecil Stanton, in his defense of ECU’s more serious qualities inadvertently revealed a primary source of the Pirates’ nature to party: “We educate more nurses than any other institution (in North Carolina) …” Catch that? The nurses. Everybody knows when nurses are off duty, they turn into party vampires. Hey, the Pirates know how to be as serious as they want to be—but partying is the phosphate backbone of their DNA double helix and there’s nothing to be done about it—because “you is what you is.”

It’s UNC Greensboro’s first time to make the CS Party School Elite. Historically it’s been a rather sleepy party school but, like UNC Charlotte, has come out of its shell the last few years. Clinical observation shows that these initial advances as a party school coincide when American rapper DaBaby attended UNCG. During his two years there he left a permanent mark on the Spartans’ party lyfe—they “live a party life, turnt up all night, enjoying the moment.” 913 Whiskey Bar & Southern Kitchen, The Blind Tiger, Westerwood Tavern, The Corner Bar, plenty of places to go near campus but most of UNCG’s best parties go down at the apartment and Greek levels. Hey, come on, you know you’ve landed in a party battlespace when the flippin’ ceilings are falling down around you.