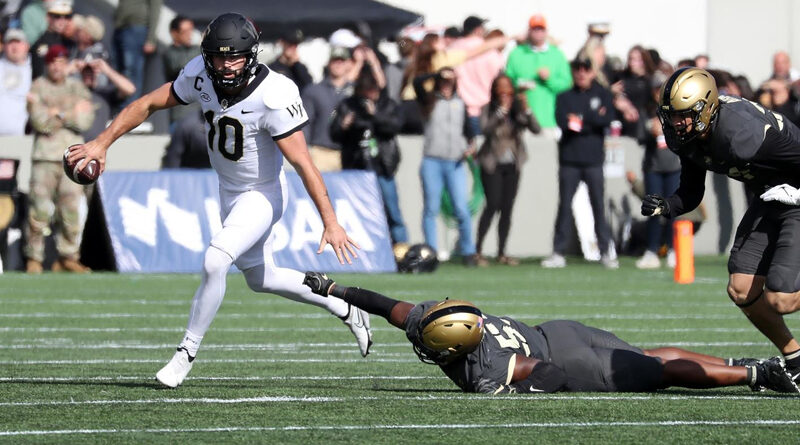 WEST POINT, N.Y. — The Wake Forest football team captured its third road victory of the season over Army, 70-56, behind a career passing performance from redshirt sophomore quarterback Sam Hartman. It marked the third-highest scoring game in Demon Deacons (7-0, 4-0 ACC) history and is the highest in a road performance.

Chandler Staton’s 24-yard field goal as time expired lifted App State to a dramatic 30-27 win against No. 14 Coastal Carolina in front of 31,061 fans at Kidd Brewer Stadium. The victory moved the Mountaineers (5-2, 2-1) into first place in the Sun Belt’s East Division.

PITTSBURGH – The Clemson football team fell on the road at No. 23 Pittsburgh, 27-17, on Saturday afternoon at Heinz Field. Clemson dropped to 4-3 overall and 3-2 in league play on the season.

PBRYAN-COLLEGE STATION, TX — Ainias Smith had a 95-yard punt return for a touchdown and Jalen Wydermyer added two TD catches as No. 17 Texas A&M built a huge first-half lead and coasted to a 44-14 rout of South Carolina Saturday night.

RALEIGH, NC — The Shaw University football team made it interesting but eventually did what was needed to put away a feisty Johnson C. Smith team securing a 20-14 homecoming victory Saturday afternoon inside of Baker Stadium in a Central Intercollegiate Athletic Association (CIAA) Southern Division matchup.

Winston-Salem State Pours It On Livingstone 21-0

Trick plays fail to score against Fayetteville State and the Broncos go on to power past the Falcons 40-12. Fayetteville State is one win away from securing its spot in the CIAA Championship and the Southern Division Titleholder.

HAMPTON, VA —The Aggies sudden inability to run the ball cost them this game against Hampton 40-12.

BUIES CREEK, N.C. – Xavier Shepherd passed for two touchdowns and ran in another, leading No. 11 Kennesaw State over Campbell 30-7 on Saturday at Barker-Lane Stadium.

CHARLESTON, S.C. – Quarterback Carlos Davis threw for a career-high 401 yards and three touchdowns while running back TJ Jones amassed 205 total yards, including 132 rushing with a pair of scores and three catches for 73 yards and a touchdown as Western Carolina upended The Citadel 45-31 on Saturday afternoon at Johnson Hagood Stadium.

Elizabeth City Gets Victory Over Chowan 32-28

ELIZABETH CITY, NC- The Vikings celebrate Homecoming unleashing a 32-28 victory over the Hawks of Chowan University. The Vikings improve to 3-5 overall, 3-2 in the CIAA. While Chowan drops to 5-3 overall, 2-3 in the CIAA.

MACON, GA. – The Wofford College football team was defeated 45-14 by Mercer at Five Star Stadium on Saturday night. The Bears scored the first 14 points and the Terriers answered with 14 to tie the game. Mercer scored the 31 unanswered points for the final margin and held the Terriers to their lowest offensive production of the season.

INDIANAPOLIS, IN. – Davidson defeated Butler 49-35 in Pioneer Football League action at the Bud and Jackie Sellick Bowl on Saturday afternoon. The Wildcats improve to 5-1 overall and stay undefeated in PFL play, while the Bulldogs fall to 2-6 and 0-5 on the season.

CLINTON, SC. – The Presbyterian College football team’s homecoming matchup with San Diego was spoiled on Saturday as the Toreros downed the Blue Hose by the score of 69-28 at Bailey Memorial Stadium.

BALTIMORE, Md. – North Carolina Central University used a strong second half and a four-touchdown performance by sophomore quarterback Davius Richard to spoil Morgan State’s homecoming with a 28-17 road victory over the Bears inside Hughes Stadium on Saturday afternoon.

ELON, N.C. – Thanks to an efficient and dazzling offensive display and a dominant defensive performance, the Elon football team won its third straight game, defeating New Hampshire 24-10. The victory was the first home one of the season for the Phoenix.

HOUSTON, TX – Despite a stellar defensive effort, a long day in Houston turned into heartbreak for East Carolina 31-24.